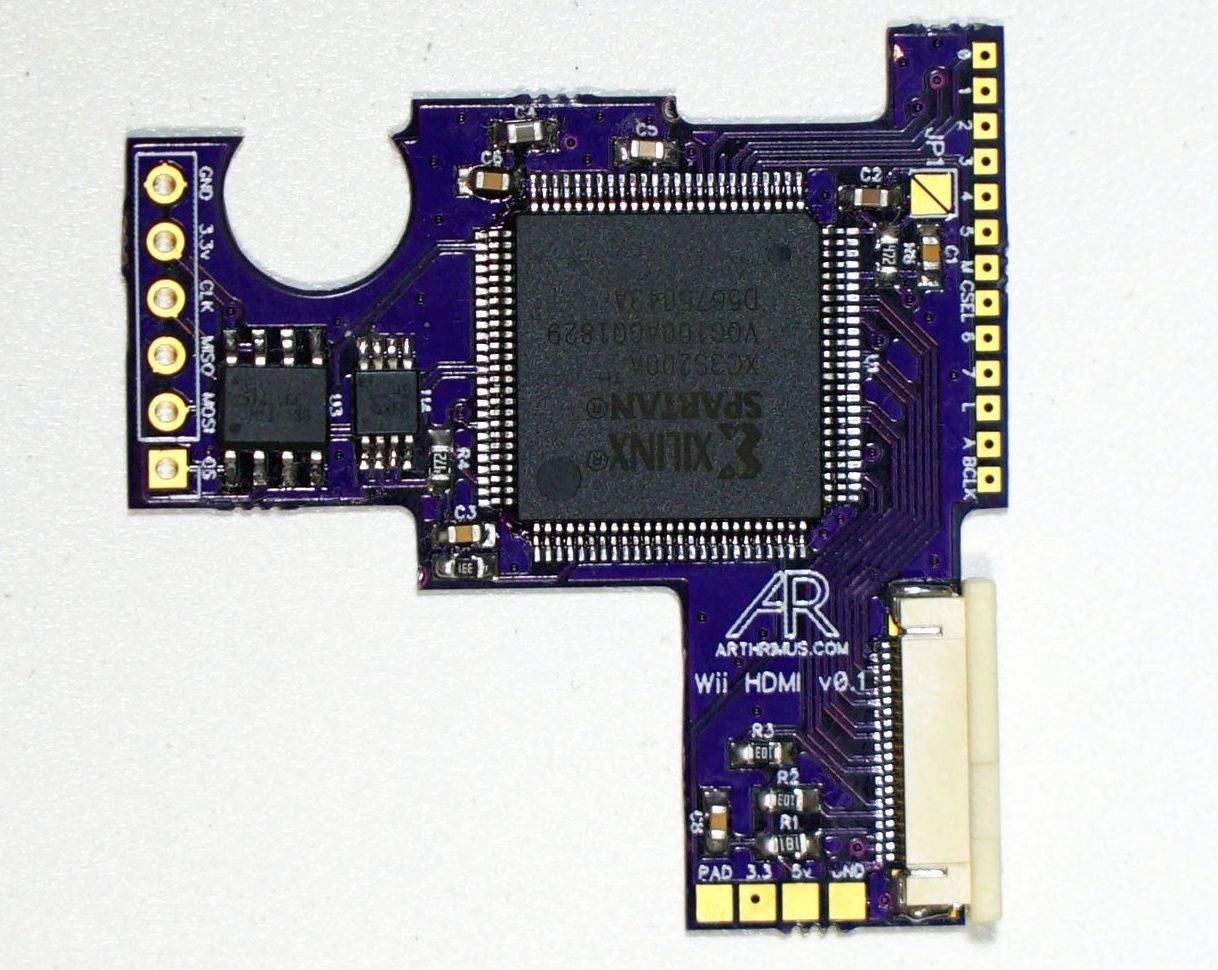 The SNES RGB + Dejitter project is wrapping up, all I’m waiting for is to test the finalized PCB design before I can call it finished. In the mean time I spent a couple days working on a Wii version of the GCVideo DVI project. I have installed a gcvideo mod into a Wii before but all of the designs aside from the Wii Dual are meant to be installed into the Gamecube, and thus don’t really fit that well in the Wii. It can be done, but it’s anything but convenient.

So I took the Wii Shuriken V3 design which happens to have Wii firmware available, and reworked it into a PCB that will fit nicely in the Wii shell and sits snugly on the Wii Motherboard just like the Wii Dual.

Unlike the Wii Dual, this mod is HDMI only, and does not have a custom flex cable designed for connecting it to the AVE-RVL chip. You have to hand wire it, but it does make for a much easier and cleaner installation than using one of the Gamecube solutions. These compromises make this mod a very affordable option to those who are skilled enough to install it. The parts cost is very low if you build it yourself. I would consider it to be a high difficulty installation so you must be confident in your soldering abilities.

It should also work on RVK-CPU-01 and RVK-CPU-02 motherboards, but they do not have Gamecube controller ports so there would be no way to open the GCvideo menu and change any settings since there is no IR remote support as of right now. I am looking into a solution to add it in the future.

The board files for this project have been posted to OshPark so you can try to build it yourself if you are so inclined. The BOM for each of the boards are in their OshPark descriptions.

You will also need a 20 pin 0.5mm flat flex cable like this. Make sure to get 20 pin same side flex cables. These 200mm ones are pretty long so if you can find shorter ones that would be fine too. I figure you could probably get away with a 100mm length cable but I haven’t confirmed that.

You can get firmware from Unseen’s Github. You should install the latest version labeled Shuriken-V3-Wii. I also have a ready to program BIN file of version 2.4C of the Shuriken-V3-Wii firmware if you don’t know how to convert the BIT files on the Github.

I will be doing an installation instruction video soon on my Youtube channel so keep an eye out for that.

This mod will also be up for sale in my store soon. Initially I think I will only offer it with professional installation due to the high difficulty of the install. I’ll see about selling self install kits once I’ve had a chance to install it in more Wii revisions and can ensure that it works in all of them.